We are very happy to introduce Santa Fe Farms to the Blooms product line. This is Trinidad’s very first truly ‘all natural’ local chicken, reared without the use of antibiotics, hormones, vaccines or chemicals.

Earlier this year, we reached out to the public in search of a farmer who could help us produce a local and all-natural chicken. Blooms sells a plethora of antibiotic-free and hormone-free chicken, but until now it was all imported from the USA. Our interest was in working with a farm that could produce a similar product here in Trinidad, using the same guidelines followed by those all-natural farms in the USA. This would not only help us offer a fresh product, but it would help promote the Trinidadian economy and put a small dent in our ever growing food import bill.

The response from our Youtube Video and subsequent Guardian Newspaper Article was incredible. Dozens and dozens of emails and phone calls poured in from all around Trinidad and Tobago, and people from all walks of life called with their support and/or interested in helping. We visited several farms and had numerous meetings with perspective farmers.

One of the farmers who contacted us revealed to have exactly what we were searching for. His farm was beyond exciting and required very little changes to achieve the product we were looking to produce. Many of the practices he uses were developed over years of trial and error, in hopes of accomplishing an all-natural product. In the chicken business, the faster and the cheaper way to do things is not always considered the best when your goal is to produce the healthiest birds. 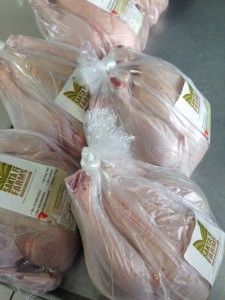 Why is Santa Fe Farms chicken different and why is it better? Well, the two primary answers to that question is FEED and ENVIRONMENT.

The environment a chicken lives in has a significant influence on the life the chicken leads and the natural health of the bird. The same could be said for most animals, humans included. Unfortunately, the better environment given to the chickens by a farmer almost always has a negative correlation with the profit of a farm. The goal with most chicken farms is to get as many conceivable chickens out of the smallest space possible, creating an increased amount of bacteria in the air that the chickens are breathing and on the ground on which they are standing. It also means they get less exercise.  This is not ‘natural’ and simply results in more illness, which then needs to be treated. This is done with medicines in the water and in the feed (more on that below).

Chicken houses are constructed to help maximize space and for complete environmental control to take place. It also allows for chickens to be exposed to light for more hours of the day, increasing the amount they eat. The faster chickens eat, the faster they achieve slaughter weight and the sooner more chicks can be brought in to complete the cycle.

When a batch of chickens leaves one these industrial pens, the ground is left with a thick layer of chicken waste that is now a hotbed for bacteria, which often makes the birds sick. This requires medicine to treat. If the waste were to be treated properly, the bacteria level in the ground would return to levels that would be naturally manageable for most birds. But again, for the sake of time and efficiency, it often is not treated correctly. A new batch arrives soon after and the process begins again.

So, how do we change that? The first step is to remove ‘maximize output’ as the priority. The focus should be on the overall health of the bird. This is done by giving the chickens more space to live, instead of trying to get as many birds into a pen as possible. Think of it as if you ate and slept at night with 40 strangers; you’d probably need to go to the doctor quite a bit more as well. When chickens have more space, they exercise and move more. Giving the chickens things like sunlight, open-air flow and clean water also strengthens the chickens’ health. Basically, anything that is just a physiological necessity to any living organism.

The floor that the chickens live (and defecate on) is also cared for very carefully. Rotation, resting and even burning by fire takes place in a specific schedule to help reduce the bacteria levels. This allows chickens to be exposed to a natural amount of bacteria to build their own immune systems. Instead of being shocked by their environment and needing medicine to survive.

Did you know that every commercial produced chicken feed in Trinidad contains antibiotics? Anything from starter feed, finisher to scratch, contains a vitamin pack that classifies the feed as ‘medicated’. Commercial feed mills include this pack because it prevents diseases such as coccidiosis in the birds. These bacterial diseases are prevalent wherever chickens are raised and much crueler under harsh conditions (please reference ENVIRONMENT above). In addition, there are several other elements added to the feed to help it maintain a longer shelf life. Companies usually do not wish for feed to spoil in storage, and the feed is often engineered to prevent mold/mildew. These antibiotics and shelf-extenders are par for the course with any commercially produced feed. Are they bad? Not necessarily. So, when buying a chicken from a local farmer, make sure you ask the farmer where they get their chicken feed. If they buy it Trinidad, there is a good chance that it contains antibiotics and it should not be sold as antibiotic free, organic, or all natural. .

The same goes for chickens (or eggs) that are sold as ‘Free Range’. The definition of ‘Free Range/Free Roaming’, according to the USDA, is the ability of the chicken to access outside. In Trinidad, it commonly means chickens that are roaming around the yard instead of in a pen. This, unfortunately, speaks nothing to the chicken’s diet and what it’s being fed. While chickens with access to more space and room live much healthier lives, many are given normal mill ‘feed’. It’s uncommon that chickens can find enough ‘bugs’ in the yard to fulfill their appetite and grow to slaughter weight. So, just because a bird is ‘Free Range’, it may not be antibiotic free or necessarily ‘healthier’ than a non-free range bird. As you see, we feel it’s very important to make sure everyone is very clear on what they are buying.

Currently, the only way to get non-medicated feed in Trinidad is to either import it or mill it yourself. Imported organic feed from abroad is very costly (mainly because of duties/vat and shipping) and comes with a limited shelf life. The chickens at Santa Fe Farms are given feed that has been custom milled fresh weekly, right here in Trinidad. Milling is defined by simply taking whole grains and kernels and grinding them into a mix that the chickens can eat.

The feed that the chickens at Santa Fe Farms are given every day contains: Corn Meal, Soy Bean Meal, Wheat Middling

That’s it. It’s milled and mixed fresh, which means it doesn’t need to sit on a shelf or in a barn for 3 months.

Note: A lot of people have asked if this chicken is ‘organic’. Technically, in order for something to be labeled ‘organic’ according to USDA standards, the feed given to the chickens must be milled from non-GMO corn/soy/etc. It’s currently not feasible for us to source non-GMO raw materials here in Trinidad. For customers that require the feed that the chickens eat to be non-GMO, we carry a fully organic chicken out of the US that achieves that.

Because of what the chickens are feed and the environment they are raised in, Santa Fe Farms will most likely not be able to supply all of Trinidad’s chicken. It’s not a product for the masses, and by it’s nature, probably never can/will be. We are limited in how many chickens we can produce with this format.

And yes, it does cost a little more than it’s imported or local chicken counterparts, with the reasons for that explained above. This is not going to be a chicken for everyone, as some customers prefer the cheapest chicken/meat they can find. We understand that every household is different. We do think, however, that most people will find the quality and healthiness of the product far surpass the margin increase in price.

From the onset, this project has taken quite a while to reach the point we are at today. The ability for us to supplement at least some of our current demand for an all-natural chicken has been an outstanding accomplishment for us. As this project grows, we should hopefully see more supply and more customers able to enjoy.

On the Santa Fe Farms website www.SantaFeFarmsTT.com, you can view information on the product and also what outlets are currently carrying Santa Fe Farms chicken.