We use our grill a lot. It isn’t uncommon for 3 of our meals made at home during a week to involve a grill of some sort. When you grill often, you probably use your grill brush a lot.

Unfortunately, I’ve noticed recently that ‘grill brushes’ are not what they use to be. The other day I was doing a little scrub on the grill after burning off some BBQ sauce and I felt that the brush really wasn’t working. I flipped over and saw that the wire bristles were 90% gone! The few lone survivors on the brush were quickly joining their friends at the bottom of our grill. The worst part was that we literally just bought this brush what seemed to be not a month ago. And I’m not sure if you’ve noticed, but they aren’t cheap. I think this brush cost us close to $60TT. That’s a pound of steaks from Blooms and almost a half of pound of steaks from the other guys! 🙂

I’m not sure where along the line, but it seems that the grill brush manufacturers have thrown quality out the window.

Here’s a solution I came up with!

I went to the hardware store and looked in the ‘cleaning’ isle. I found the wooden handle brushes and they were about a third of the price. Now, the handles aren’t long, so your hand gets a little close the the grill. And they don’t have a ‘scraper’. (I use a putty knife anyways). But pound for pound, these little guys work 10x better than the plastic grill brushes. I used it for the first time last night and was really surprised by the outcome. If this works for at least 1.5 weeks without falling apart, it should also be much more cost effective. 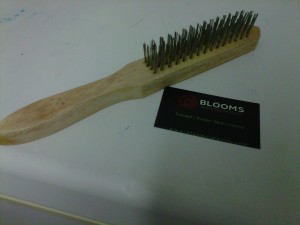 Next time you are in the hardware store, pick up one of these and a putting knife/paint scraper. I think you will be surprised how easy it is to use these two WMDs on your grill grate to make sure you get them sparkling and ready for a Bloom’s Ribeye.

I bought a couple extra if anyone wants to add to their order. Just let me know.