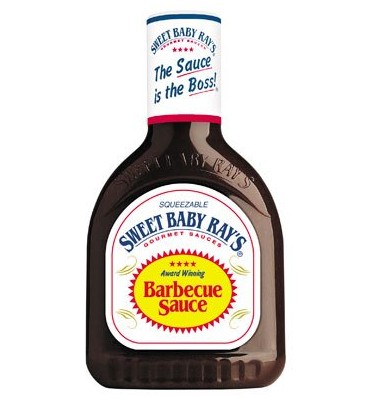 World Famous Sweet Baby Rays BBQ Sauce. A lot of competition BBQ folks use this as their finishing sauce.

The story:
It all began back in 1985 when a local Chicago boy named Chef Larry perfected his family’s recipe for a sweet and tangy BBQ sauce and entered it into the country’s largest rib cook-off, the Mike Royko Rib-off. Chef Larry called his sauce Sweet Baby Ray’s after his little brother David, who got the nickname shootin’ hoops on the west side of Chicago. On the day of the rib-off, Sweet Baby Ray’s beat nearly 700 entrants to come in second – an amazing feat for an unknown. The rest, as they say, is history.

When brother David and friend Mike caught wind of Sweet Baby Ray’s success, they, along with Chef Larry, decided to take the sauce on the road. What would the rest of America think?

Knocking on doors, selling to small mom-and pops, even grilling right on the sidewalk, word of Sweet Baby Ray’s savory taste spread like wildfire. By 1994, Sweet Baby Ray’s distinctive bottle could be found on grill pits and dinner tables across the Midwest. With their sights now set on the rest of the US, Larry, David and Mike took to the streets again. From 1996 through 1999 sales soared. Sweet Baby Ray’s also became the BBQ Guru to the taste of Chicago (that’s 4 million visitors and a ton of napkins). By the end of the century Sweet Baby Ray’s US sales had topped 500,000 cases annually.

Sweet Baby Ray’s has become the fastest growing BBQ sauce in America and the #1 premium BBQ sauce in grocery. Tomorrow, maybe the universe.

There are no reviews yet.

Be the first to review “Sweet Baby Ray’s BBQ Sauce”